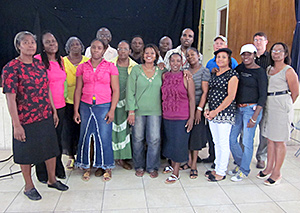 More than 1,200 Jamaican Christians were trained to communicate the Gospel more effectively this spring through a series of 25 Share Your Faith workshops in Jamaica during March and April. It was a major push led by Devon Linton, EEâs Regional Director for the Caribbean, with a helpful assist from a team of U.S. staffers who traveled to the island nation to help lead workshops.

EE is expanding and the Gospel is spreading in the Caribbean. Hereâs the report Devon sent to the EE U.S. representatives who assisted with the Share Your Faith workshops:

With your sacrifice, you have assisted the EE ministry in Jamaica and by extension, the Caribbean, to facilitate 25 Share Your Faith workshops with 245 churches being represented and 1,239 believers equipped to be more effective in sharing their faith. Praise the Lord!Â  We had 44 pastors attending these workshops and we already have five pastors representing about 40 churches that are eager to participate in an Ev2 launch.

Like the U.S. representatives, you, as our ministry partner, have also assisted this wonderful effort. Thank you!

One Response to 1,239 people catch the Gospel in Two Months.