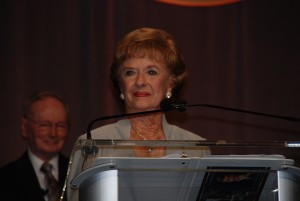 It is my hope that, one day, EE will have a âvision centerâ located somewhere in the world. As you enter this building, near the entrance will be a glass case in which will be a book that powerfully demonstrates the passion to win lost people to Christ that is at the heart of EE.

That book is one that Anne Kennedy, the wife of EEâs late founder, Dr. D. James Kennedy, has kept for years. In it she has written all the people she has won to Jesus Christâtheir names, their addresses, the times that she has prayed for them, the dates on which she has sent notes to encourage them. 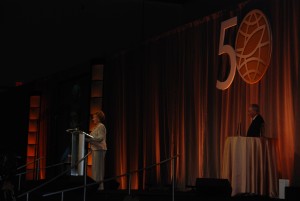 That began the ministry of Evangelism Explosion. I believe that same passion that still lives in us today at EE. We have a burning desire to see lost men and women won to Christ and to bring the Gospel to where it has never been. It is a testament to the passion for people.

One of the very first people to be trained in EE, Anne is a delightful lady whom my wife Ann and I have been privileged to know for many years.Â Â Anne Kennedy spoke at our 50th anniversary banquet last Friday, Feb. 24th, and offered a few recollections from a lifetime of sharing Christ with others.

She recalled how things did not always go exactly as planned. The first EE clinics had two days of classes followed by on-the-job training in evangelism at night during which trainers would present the gospel while clinicians observed. It was the clinicians turn on the third night to share the gospel. Well, as Anne said, âThere were some shaky knees that night.â Â So much so that one clinician, a âRev. Smith,â didnât answer when called to breakfast at the home in which he was staying. When his room was checked, the bed was made and the luggage was gone.Â  As Anne said, he âhad flown the coop,â

But most often, things went very right, as God made âdivine appointmentsâ to bring people to himself. Anne shared this encounter that took place while visiting her father in the hospital after surgery.

I was waiting in his room for him to come out of recovery.Â  There was an older man in the other bed and I went over to talk to him.Â  I shared the Gospel and he prayed to receive Christ.Â  When my Dad was wheeled into the room the man got out of bed and rushed to his bedside and said âIâm going to heaven, Iâm going to heaven!â My Dad was groggy and didnât know what was going on, but that little man was so excited that he was going to heaven he just HAD to tell someone right away.Â Â  He was VERY ill and wasnât supposed to get out of bed.Â  After that, they restrained him and to my knowledge was not ever up again before he died and went to heaven.Â  I think of how the Lord arranged all of this for âSuch a Time as This.â

Anne was ready and able to share the gospel with an elderly man at deathâs door because she had been trained in EE. The same was true for Malcolm Thomas, EE South Africa board chairman, who told at the banquet about his dramatic encounter with a desperate young soldier facing a Christ-less eternity.Â  Iâll share that story in my next post.