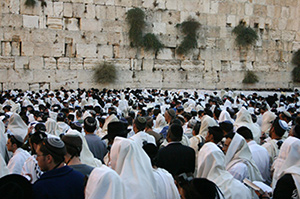 Starting at sundown tonight, Jewish people across the globe begin their observance of Yom Kippur, the Day of Atonement. It is a time of prayer, fasting, and repentance.

Weâre told in the Bible that atonement, or having your sins wiped away, requires a blood sacrifice. Thatâs a strange concept to modern ears, but as God revealed to Israel, âit is the blood that makes atonement for the soulâ (Leviticus 17:11 NKJV). Thatâs why the writer to the Hebrews says in the New Testament, âwithout shedding of blood there is no remissionâ [forgiveness] (9:22).

There hasnât been a temple sacrifice since 70 a.d., when the temple in Jerusalem was destroyed. Forty years earlier Jesus had âoffered one sacrifice for sins foreverâ (Hebrews 10:12).

But even after the curtain into the Holy of Holies had been split from top to bottom at Christâs death, the Jewish high priest continued to enter the Holy of Holies year after year on Yom Kippur to make atonement for himself and for the nation of Israel.

But a fascinating historical footnote indicates things had changed.

The Talmud records inscrutable events that took place in the 40 years before the templeâs destruction in 70 a.d. According to the Jerusalem Talmud:

“Forty years before the destruction of the Temple, the western light went out, the crimson thread remained crimson, and the lot for the Lord always came up in the left hand. They would close the gates of the Temple by night and get up in the morning and find them wide open” (Jacob Neusner, The Yerushalmi, p.156-157).

Hmm. What does this mean?

Scholar Michael Brown, a Jewish believer in Jesus with a Ph.D. in Near Eastern Languages, says this in Answering Jewish Objections to Jesus: General and Historical Objections (p. 74):

According to [Talmud] b. Yoma 39b, God did not accept the sacrifices that were offered on the Day of Atonement for the last forty years before the destruction of the [Second] Temple (this was known to the people by means of a series of special signs, all of which turned up negative for those forty years; see [Talmud] b. Yoma 39a). The Temple was destroyed in 70 c.e., so from 30 to 70 c.e., a period of forty years, the annual atonement sacrifices were not accepted. What great event happened in the year 30? Jesus was rejected and nailed to a cross! Is it possible that God no longer accepted the atonement sacrifices because the Messiah had offered himself as the perfect, final sacrifice?

The answer is yes!

Psalm 32:1 says âBlessed is he whose transgression is forgiven, Whose sin is covered.â Â Thatâs a blessing we as Christians both know and share. Pray for Jewish people today that, as they seek atonement on Yom Kippur, they will find it through the only means possible, the sacrificial death of the real messiah, Jesus.

2 Responses to A Day of Atonement?