Headlines such as these are becoming commonplace and people are no longer surprised when natural disasters occur.

When disasters occur, lives perish and many questions are directed at Christians. Arguments come that either God does not love or God cannot be all-powerful since He cannot prevent these disasters. Others completely deny that God even exists.

The Bible reminds us however, that these disasters have been foretold. Jesus says when speaking about the last days, “On the earth, nations will be in anguish and perplexity at the roaring and tossing of the sea.” (Luke 21:25 NIV)

Unfortunately after each disaster, there are people who assign human-generated reasons for the ill-fortune of those affected. As if the misfortune of having property destroyed, loved ones perished or missing, and lives in turmoil is not enough, they now have to contend with accusations that the victims must have sinned. Even well meaning believers sometimes accept that a just God has somehow executed judgment on evil people. Let’s not jump to conclusions though.

The book of Luke records an incident, when some people brought to Jesusâ attention disasters that had befallen certain groups. Some Galileans were killed brutally by Pilate the governor and elsewhere 18 had died when a tower fell on them. Jesus was quick to highlight that these victims did not perish because they were more evil than others. In fact Jesus explains that death will come to everyone unless they repent. He tells his hearers, “Not at all. Unless you turn to God, you too will die.”Â (Luke 13:5)

The worldly mind will always seek to justify themselves and condemn God. This has been happening since time immemorial.

However the tsunami is a call for the whole world to repent! God wants us to know that we are all guilty! The human race is a race of rebels deformed by sin. The reason that people die is because of sin. If it werenât for sin, we would never die! The Scriptures say, “There is no one righteous, not even one,” (Rom 3:10 NIV).

We are already condemned! This world is one huge death row! When describing a recent disaster, Anne Graham Lotts said, “The tsunami did not add one person to the total of people that are going to die.” Indeed “all have sinned and have fallen short â¦”Â (Romans 3:23).

The most important message the world must hear is that Christ died for our sins. Godâs justice, Godâs mercy, Godâs omnipotence is not destroyed by any natural disaster. We all need to repent, not just those who perish in a natural disaster.

The Christianâs response to any loss of life is to show practical love and to sacrifice to alleviate the suffering of those effected. We also need to share the hope that Christ gives through the gospel.

Natural disasters demonstrate that mankind is not so powerful that he does not need God. People everywhere become more open to the gospel after a disaster. No, disasters show us that we need God. Natural disasters not only open up people to respond, they often open up regions to the sound of the gospel. The gospel is going through like a tsunami in these last days. As Jesus has said, “All authority in heaven and on earth has been given to me.” (Matt 28:18 NIV)

God wants to tell the whole world that He loves us very much. Through His Son, He sends to us â¦. a tsunami of love. 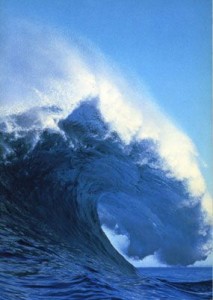