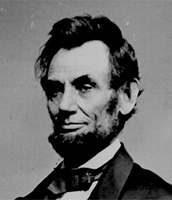 All sides agree that our 16th president was a skeptic for much of his adult life. He learned the Bible at his motherâs knee but turned into a rationalist who rejected the deity of Christ and his resurrection as a young man.Â  Among the influences that took him down the road to doubt was Volneyâs Ruins, a broadside attack on Christianity that put the chill on his boyhood beliefs. Â Lincoln even wrote a book outlining his skeptical ideas.

But thatâs not how the story ends.

The authors of an 1891 Lincoln biography describe an interview Lincoln had with a woman from the U.S. Christian Commission. This organization aided Union soldiers on the battlefield with Bibles and bandages and had a womenâs auxiliary that started in May 1864.

After several visits with her, Lincoln had grown impressed by her âChristian characterâ and asked her âwhat constitutes true religious experience.â

She didnât follow the entire EE outline, but did at least cover âmanâ and âChrist.â As the authors of Lincoln, His Life and Times summarize, she said âit consisted of a conviction of oneâs own sinfulness and weakness, and personal need of the Saviour.â

Lincoln heard her out and sat silent for several minutes. Then he told her that until the death of his 11-year-old son Willie in 1862, he had not recognized his need for a Savior. âThat blow overwhelmed me,â he said. âIt showed me my weakness as I had never felt it beforeâ¦. I think I can safely say that I know something of that change of which you speak; and I will further add, that it has been my intention for some time, at a suitable opportunity, to make a public religious profession!â

And how did Lincoln return to faith? Gurley recalled that in the latter days of his chastened and weary life, after the death of his son Willie, and his visit to the battle-field of Gettysburg, he said, with tears in his eyes, that he had lost confidence in everything but God, and that he now believed his heart was changed, and that he loved the Savior, and, if he was not deceived in himself, it was his intention soon to make a profession of religion.

From great skeptic to great believer through great trial. Godâs grace can reach anyoneâgreat or small. And as we make ourselves available to share the gospel with others, we will see Him do just that.