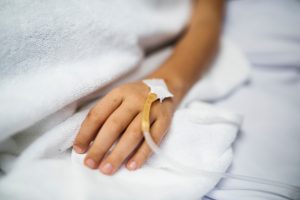 You see, everyone is gifted in one way or another, and for Steve, talking and building relationships are some of his gifts.Â  His personality made it easy to be trained in EE – talking to people about his faith in Jesus wasnât so hard for him to do. That doesnât mean, though, that every conversation was easy.

Steve moved his family to Columbus, Ohio thirty years ago, where a neighborhood boy named Richard became fast friends with Steveâs boys. You see, Richard had an abusive father who claimed to be a Christian, so Steve became a father figure to him, filling in the gaps.

Even though Steve was unashamed to share his faith, and his son repeatedly shared the Gospel with Richard, he didnât want it. Richard loved Steve’s family but he was adamant that he was not open to Christianity. After all, his dad beat him and claimed to be a Christian! Who would want that?

This family never gave up, though. Over the course of the next thirty years, Steve talked about Jesus to Richard whenever he had the chance.

Steve was going to visit Richard, when the Holy Spirit told him to be quiet!

âWhat do you mean, God? If I have to be quiet, you have to make Richard bring up the Gospel!â

Well, Steve walked into Richardâs hospital room. The once young and healthy teenager who ran through Steveâs house was lying in a hospital bed on the Oncology floor gasping for air. Cancer was a new and terrifying part of Richardâs life and it was taking over quickly.

The pair sat in silence for nearly three hours, and just before Steve had to leave, Richard said, ‘the chaplain came today.”

“Yeah? Did he pray with you?” Steve said.

Again, the answer was no.

Steve said, âyou know, I can give you the main points of the Bible without even opening it.â

He then shared, on his hand, the Gospel and even had an EE Gospel tract with him which he gave Richard before the nurses interrupted their visit. Within a few more visits, Richard was actually asking Steve to open up the Bible!

Finally, he received Jesus through the testimony of Steve and his son, about six weeks before he went on to meet Jesus face to face! Between meeting Jesus on earth and meeting Him in Heaven, Richard was trained by Steve to share the Gospel – and he was faithful until his very last day on earth!

Are you ready? If you’re not, what can you do to become ready to share the Gospel? Evangelism Explosion has so many tools to help you easily, share the Gospel; just like Steve and Richard.

This is our focus this week at Evangelism Explosion through our social media channels and our daily broadcast. Visit ShareLife.Today for resources to help you share your faith.

May God richly bless you this week as you faithfully serve Him.

This is a transcript from Conversations with John Sorensen #18