Anne Kennedy Remembered posted by John Sorensen on May 16, 2017 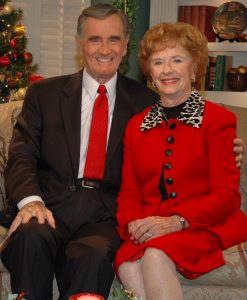 Wife of EE Founder was “Lamplighter” for Christ

Anne Lewis Kennedy went homeÂ Tuesday afternoon, May 16, to the Savior she loved and served for more than 60 years. Her home-going was all the sweeter for her, I believe, because it reunited her with her late husband, Jim Kennedy, the man who led her to Christ and the founder of Evangelism Explosion.

And, I am sure she also encountered hundreds, perhaps thousands, of people she personally led to Jesus during her lifetime.

Anne meticulously kept a record of each one’s profession of faith and her follow-up efforts in her famous “black books.” I liked to kid her about her conscientious and expert record-keeping–something I could not do. It testifies to a lifetime of fruitful service beside her late husband.

Anne and Jim were married for 51 years until his home-going in 2007. They were partners in marriage and ministry. And partners on the ballroom dance floor where Jim, as a young Arthur Murray dance instructor, found himself immediately smitten when he first saw her.

“No doubt about it,” he told another instructor. “That’s the girl I’m going to marry.”

Anne was one of the very first to be trained in EE in 1962 and almost certainly had the record for longevity as a trainer, having done so for some 50 years. Her support for Jim was constant. After he learned to effectively share Christ during evangelism meetings in Atlanta with Kennedy Smartt, he returned home bursting with enthusiasm, and declared, âHoney, we can change the world.â She could have dashed his excitement with a dose of cold ârealityâ by saying, âI donât think so.â But she didnât. Instead, she shared his passion to win others to Jesus.

We called her the “First Lady” of Evangelism Explosion, a title she richly deserved. With her husband, she led by personal example and lived out, from the very beginning, active obedience to Christâs command: âFollow Me, and I will make you fishers of men.â

She personally reached a point in her life where sharing the gospel through EE was her reason for living. It was what she loved to do. âKnowing how to witness,” Anne said, “is the most important thing I have ever learned.â

Anne also loved musicâsomething else she shared with her partner in life, Jim Kennedy. She sang in her church choir all her life and performed with the white-gloved members of the church hand bell choir, as well. I remember many a Sunday seeing her in the choir loft behind Dr. Kennedy in the pulpit. Behind every great man, in fact, is a great woman. That’s certainly true of Anne.Â A devoted wife and mother, she was namedÂ Homemaker of the YearÂ in 2004 by Phyllis Schlafly’s Eagle Forum.

Anne kept on sharing the Gospel through EE even in her later years. Along with her devoted daughter, Jennifer, Anne regularly participated in EE and continued to fill neatly-lettered notebooks with the record of those who met Christ through her witness.

Dr. Kennedy liked to say Christians are “lamplighters.” When we share the light of Christ with others, we are like those who, before electricity, lit street lamps at dusk–leaving behind a beautiful avenue of light.Â That was the story of Jim Kennedy’s life and it is just as true of his dear wife, Anne. She, like him, leaves behind a trail of light that will shine for all eternity.

It has been a true honor and distinct pleasure to know thisÂ gentle woman of deep and sincere faith. She was a constant source of encouragement and support to both my wife Ann and me. All of us at Evangelism Explosion extend our deepest condolences to her daughter, Jennifer, and her husband Chip Cassidy, in their loss.