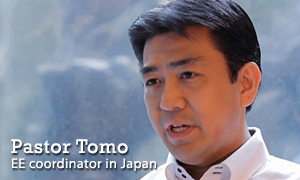 Japan is one of those hard-to-reach countries that have been referred to as âthe graveyard of missionaries.â That reference for Japan may be changing if Pastor Tomo Yamanaka has anything to do with it. Pastor Tomo directs the EE ministry in Japan.

After just 18 months of using the EE training ministry at his church, more than 40 people made professions of faith in Christ and 100 people attend weekly. âThe EE ministry was the direct source of growth,â he says.

In a short time, Pastor Tomoâs church has four teams of 12 trained witnesses going out weekly to share their faith. âIn one month,â he says with much enthusiasm, âwe experienced 14 professions of faith in Christ.â He expresses reverence to God in this outpouring of His grace. âI believe we have been entrusted with something revolutionary and extraordinary,â he says.

In Japan, less than one percent of the population is Christian, but Pastor Tomo believes that with EE, a Japanese reformation will take place. âJapan has been called âAsiaâs last fortressâ among disappointed missionaries, but EE will forever change my country,â exclaims Pastor Tomo.