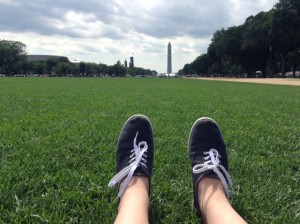 Lindsay Vaive is an intern with the D. James Kennedy Center for Christian Statesmanship in Washington, D.C.

Yesterday, we sat along the flat, grassy Mall at the foot of the Washington Monument when one of the team members remarked, âWeâre at the center of the free world!â I had heard Washington, D.C. described as such on several occasions, and coming at it from a culturally based understanding, it holds some truth. But as a Christian whose worldview is saturated with a spiritual understanding, it is hard to look at any institution apart from Christ and describe it as âfree.â Paul says in Galatians 5:1 that ââ¦ Christ has set us free; stand firm therefore, and do not submit again to a yoke of slaveryâ (ESV). That slavery refers to sin. Americans donât need to be made aware of its freedom because they believe it already to exist. What they need, is to be made aware of their slavery. No freedom of speech, freedom to vote, freedom to bear arms or freedom of religion can liberate us from the bondage to our sin, except that which is found in Christâs work on the Cross. My prayer as a Capitol Hill intern is that the center of the âfreeâ world can one day emanate true freedom found in Christ. Not by any legislation or policy, but by repentant hearts that have been overwhelmed by the free gift of life found in the person of Jesus, who truly freed us from slavery.

“â¦ now that you have been set free from sin and have become slaves of God, the fruit you get leads to sanctification and its end, eternal life. For the wages of sin is death, but the free gift of God is eternal life in Christ Jesus our Lord.” (Romans 6:22-23, ESV)