Billy Grahamâs Home-going: A Servant of Christ and Extraordinary Man of God posted by John Sorensen on Feb 21, 2018

Along with the Graham family, the Billy Graham Evangelistic Association, and millions worldwide, all of us at Evangelism Explosion join in mourning the death of Dr. Billy Graham, a servant of Christ and an extraordinary man of God. 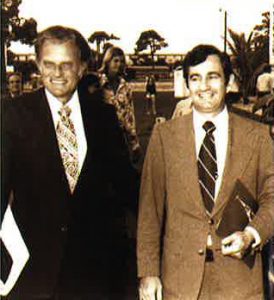 While saddened by his departure from this life, we know that Dr. Graham is now rejoicing in the presence of the One he served so long and so well. We honor and celebrate his legacy as a man God used to bring millions to faith in Jesus Christ. And a man who finished well.

Dr. Billy Graham made his life count for Christ and eternity. He was certainly one of the most influential evangelical Christians in the twentieth century, a man who called on Presidents, was known as âAmericaâs Pastor,â and spoke to an estimated 2.2 billion people during his life via his crusades, radio, and television.

And he never really retired. He marked his 95th birthday by releasing a series of new videos called My Hope with Billy Graham, which have been used to introduce people across America to a personal relationship with Jesus Christ as Lord and Savior.

Dr. Graham holds a special place in the hearts of all of us here at Evangelism Explosion. He was a good friend of EE founder Dr. D. James Kennedy and the EE ministry.Â  In fact, he had a huge role in the establishment of EE in its early days.

Dr. Graham paid for translations, encouraged leaders around the world to get involved, and featured a young Jim Kennedy at many of his Schools of Evangelism. He even wrote the foreword for Dr. Kennedyâs book, Evangelism Explosion, telling readers more than 40 years ago of his enthusiasm for our evangelism training ministry which is now in every nation on earth.

We need to celebrate it when people live well and finish well. Â That is what we have witnessed in the life of Dr. Graham. We celebrate the grace of God in him and the awesome impact of his life and witness in lives and entire nations across the globe.

15 Responses to Billy Grahamâs Home-going: A Servant of Christ and Extraordinary Man of God