Friday, Dec. 14: My husband, daughter and I were driving us to a friendâs graduation. I was in the back seat, working on a family Christmas letter when my phone beeped. It was a text message from our daughter who works in the hospital closest to the Newtown shooting site:

âA quick prayer request: There was a shooting at a local elementary school…they are bringing the wounded here…â 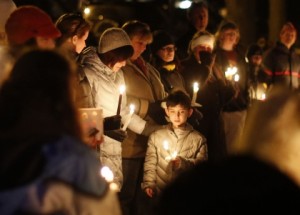 The news felt like a knife jabbed in the stomach. We prayed! Many of us will always remember where we were when we heard the news of the Newtown shooting.

Today I returned to the task of writing a Christmas letter. How can I say, âMerry Christmasâ or âHappy Holidaysâ or âHappy New Yearâ? I know people in Newtown and in the surrounding communities. They know families who lost loved ones or were in the school. Christmas for them wonât be very merry. 2013 wonât be especially happy. What can you say to someone so wounded?

I love Christmas traditions. But if you are grieving, celebrations may feel as repulsive as off-key music. And when we strip away the glitter and the trimmings, whatâs left?

I thought about Christmas. Two teenagers whose lives were interrupted so that they could bear and raise a Saviour. Few believed their story. But a crazed man did. A king. And the two teenagers soon found themselves refugees with a baby, fleeing in the night to protect the vulnerable child from carnage. Not a merry picture.

And then I thought about a Father who sent his son on a rescue mission. For us. Who would have thought that a baby could rescue humanity? But people for two thousand years, from almost every people on earth, attest to the delicious freedom that baby brought. He doesnât insulate his followers from the devastation brought by humanityâs rebellion from the Father. But through his sacrificial death, he transforms those who seek him and gives them new life — now and forever.

I donât know how many times Iâll say âMerry Christmasâ this year. But I can certainly say,