Center for Christian Statesmanship Gets New Home on Capitol Hill posted by John Sorensen on Mar 18, 2013 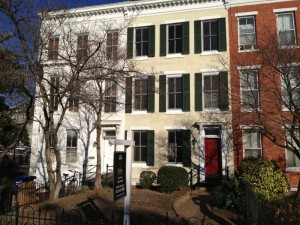 I have amazing news. After 18 years on Capitol Hill in rented facilities, the D. James Kennedy Center for Christian Statesmanship will soon move into its own permanent home. I canât wait for the grand opening in June.

Since its founding in 1995, the Center, which is an EE ministry, has touched the lives of thousands, bringing the gospel, Christian discipleship, and a vision for Christian statesmanship to lawmakers, staffers, and interns on Capitol Hill. But real estate is, letâs just say, pricey on Capitol Hill and the Center has never had its own buildingâuntil now. Thanks to a generous friend of Evangelism Explosion, we were recently able to purchase a stately row house a couple blocks from the U.S. Capitol.

Originally built in 1890, the Centerâs elegant new three-story office and ministry space is located at 402 New Jersey Avenue SE, a choice location for outreach given its proximity to both the Capitol and nearby office buildings for members of the U.S. House of Representatives.

The Centerâs Executive Director George Roller is already looking forward to hosting ministry events at the ministryâs new home. In fact, he thinks he can pack some 175 Hill interns into the backyard for barbecue and to hear a member of Congress share the Gospel. 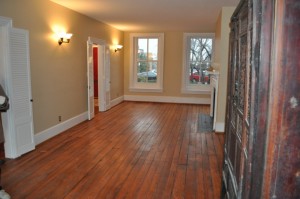 And thatâs not all. We have already begun renovations both to optimize the building as a ministry center and to house the new D. James Kennedy Library on Capitol Hill.

Once complete, the library will be a repository of some 2,000 sermons preached by Dr. Kennedy, as well as 2,000 volumes from his large personal library.

It will be a place where legislators and Hill staffersâwho often become elected leaders themselvesâcan learn to think biblically about matters facing our nation. The resources housed in the library will help the people who write our nationâs laws gain the concepts and vocabulary necessary to articulate a biblical worldview in the halls of Congress.

Dr. Frank Wright, the original executive director of the Center for Christian Statesmanship, joined me last Friday in Fort Lauderdale as we announced the building acquisition and plans for the new library at a fundraising banquet. Frank, an Evangelism Explosion board member and President of the National Religious Broadcasters, served as the Centerâs first director from 1994 to 2003. He may be even more thrilled about the new facility than I am.

âI canât begin to tell you how excited I am about the prospect of seeing this come to fruition,â Dr. Wright told the banquet gathering. âI think the Center for Christian Statesmanship today is poised at the threshold of a new burst of fruitfulness for the Gospel and that it will have an impact not just on ourÂ  nation but on the world.â

That is my hope and prayer as well. Please join me in thanking God for this amazing blessing and for his provision as we seek the funds needed to complete renovations before our grand opening in June. Iâll keep you posted!