Children Lead Dad to Christ posted by jwatson on Aug 13, 2014 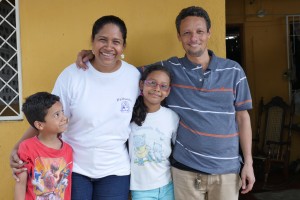 Aribal had no spiritual upbringing. And anything he heard was often forgotten. He avoided attending church until his son and daughter were doing something he thought was very unusualâthey were talking about God.

His son and daughter began attending the Hope for Kids Explorers Club training that equips children how to share their faith in Christ and then disciples them to grow deeper in their faith. They were bringing home their story lessons and Bible verses and sharing those with Aribal, but his forgetful mind would hinder him.

Their persistence paid off as he soon became interested in this Savior Jesus that his children talked about. So he began attending church and made it a regular habit. It wasnât long when Aribal professed Christ as his Savior and Lord. âIf anyone had told me that my children could tell someone else about Jesus, I would think this could not be true,â Aribal said. âBut it is true and Iâm so glad that they can tell others the Gospel.â

For information on Hope for Kids Explorers Club and how you can be a part of seeing millions of children equipped with the Gospel, visit http://evangelismexplosion.org/hfkec