I attended my first EE Clinic in 1976 and visited Coral Ridge Presbyterian sponsored clinics three times in the next 12 months. At the beginning of each clinic Dr. Kennedy taught his Biblical Basis for Evangelism Explosion. In Malang, Indonesia last August, as representatives of EE from around the globe gathered to share and plan, I reflected often upon how pleased Dr. Kennedy would be to see his dream lived out. While I never recall his using a baseball analogy during this lecture, it may be apropos in this instance. His four bases of evangelism: 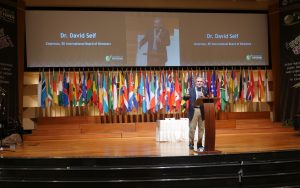 David Self speaks at the 2016 EE Congress of Nations

First Base: Every Christian is to be a witness.Â  This principle is embodied in EEâs vision statement: âEvery nation equipping every people group and every age group to witness to every person.â It was the driving force behind every meeting, speaker, focus group and program of the Third Triennial Congress of Nations. Multiplying nations increased from 30 at our first Congress in Kuala Lumpur to 78 this year. Â Testimony after testimony recounted divine appointments from Azerbaijan to Zimbabwe as trained witnesses shared the gospel.

Second Base: It is the responsibility of the Pastor to equip the saints. A major shift in EEâs approach to Pastors is apparent in EEâs field worker strategy. It developed first in Indonesia and since, under the guidance of Rod Story, Executive Vice President of EE, has spread to virtually every nation. The shift has developed from a âcome and hearâ approach to Pastors in the 90âs to a âhow can we serve youâ availability of field workers to assist local Pastors today. EEâs staff of full time international field workers now numbers over 500 in 93 nations, each working directly with local church Pastors to equip the saints.

Third Base: Equipping is best done by On-the-Job training. On Saturday evening of the Congress, Toni Linjama, National Director of EE Finland, reminded us of the vital importance of on-the-job training to equipping in evangelism. Toni spoke of pastors, discouraged by a classroom only approach, becoming energized by âtaking it to the streetsâ. Combined with a strong prayer emphasis, OJT revitalized the national ministry in Finland.

Home Plate: Training soul winners is spiritual multiplication. Perhaps the greatest takeaway from the Congress was the realization that multiplying soul winners is not only our primary strategy in EE but is also effectively changing culture around the world. Strong national ministries are building training centers, printing materials in local languages and assisting Pastors in a ministry of multiplication. As Dr. Kennedy often said âOne can count the seeds in an apple but no one can count the apples produced by a single seed.â 2015 was the first year to see ten million professions of faith reported through EE. However, even that astounding number of souls is limited to only multiplying nations and organized OJT activities. Heaven only knows the true impact of every witness trained during the 50+ years of EEâs ministry. Because sharing oneâs faith is a passion and skill that once learned is never truly lost, people trained in EE decades ago are still completing divine appointments today.

As Dr. Kennedy looked on from heaven, Iâm quite certain he viewed the Congress as a home run. In baseball, when a slugger hits one over the fence, teammates are heard to shout âTouch âem allâ, referring to the three bases plus home plate which constitute a home run. In Malang, Indonesia we heard and saw ample evidence that all the bases are being touched every day around the world through Evangelism Explosion.