EE honored by Christian broadcasters posted by jwatson on Apr 04, 2013

The National Religious Broadcasters gave its prized Milestone Award to Evangelism Explosion International on March 5 at the NRB Convention in Nashville. The award honors EE for 50 years of training people around the world to effectively communicate the 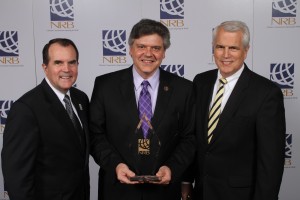 Evangelism Explosion began in 1962 when EE founder Dr. D. James Kennedy recognized that training lay-people to present the Gospel and teach others to do the same could energize evangelism and explode church growth. Since then, EE has equipped millions to tell others about the Gospel, offering training to people of every age: children, youth, Gen Xers, adults, and seniors.

During the past year, EE, which is used in every nation, trained some 468,000 people to tell others about the way to heaven, and in the process saw nearly 7.9 million people profess faith in Jesus Christ alone.

âThis last year was the very best year of the ministry of Evangelism Explosion,â said Dr. John B. Sorensen, President of Evangelism Explosion. He noted that EE conducted 2,342 week-long leadership training clinics around the world in 2012. Some 50,000 churches worldwide actively use EE, a number EE hopes to increase to 60,000 by the end of 2013.

âMillions of Christians worldwide want to share their faith but many donât know how,â said Dr. Sorensen. âEvangelism Explosion has great tools that help people learn to share their faith and then equip them to train others to do the same. And weâre doing it all over the world.â

Other Milestone award recipients include John MacArthur, Billy Graham and Mike Huckabee.Â  A video from the NRB ceremony is below.

To interview Dr. John B. Sorensen, President of Evangelism Explosion, please make your request via our contact page.