EE Weavers Finds Open Hearts in India posted by jwatson on May 25, 2012

Everything you’ve heard about India is probablyÂ true, somewhere in India.

But most of all,Â India is about people. Â Lots and lots of people. In Mumbai —a city of 20 million— where the recent EE Weavers workshops were held, traffic p 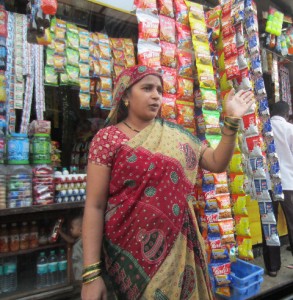 ulsates round-the-clock, whizzing past glitzy office buildingsÂ and posh apartment houses. Between many of those buildings and the roadway, families live in quickly erected shelters made of tin, poles, scrap lumber, plastic and canvas. And for some families, “home” is a mosquito net on the raised median strip betweenÂ lanes.

Over a billion Indians do not know Jesus Christ as their one true God and Savior. Â But the good news is that the Christians inÂ IndiaÂ (about 2% of the population) are uniquely placed by God to reach their own people. Â They speak the 400+ languages of India. Â They understand the cultures. Â So, what do they need from the church worldwide? Â Equipping. Â They need people to come alongside them and give them tools for training their own people to be effective messengers in their communities, and among 2000 of the world’s “least reached” ethno-linguistic people groups found within the borders of India.

One participant from last year’s Weavers training told how he implemented the Weavers training: Â “After the training, I used the practical steps I learned at the EE Weavers training workshop to reach out to people in the apartment buildings in my neighborhood. Soon people from two different people groups, speaking two different languages, began committing to faith in Christ. Â Over the year, God enabled me to train seven others using Weavers. Now there are two growing churches among each of the two people groups in our neighborhood.”

EE’s vision is to equip people from every people group to share the Gospel with every person. By God’s grace, through faithful people like our Indian brother training other faithful people, the vision will become reality.