From Tragedy to Triumph! posted by John Sorensen on Oct 04, 2017

Iâve heard the wordÂ âtragedyâ used quite a lot these days. This morning, as I was praying, I was reminded of a powerful phrase Dr. Kennedy, EEâs founder, used to say. It came to him on the tail of a rather tragicÂ moment in theÂ life of Coral Ridge Presbyterian Church and EE.

In the late 1970’s, there were three young men who were a big part of Evangelism Explosion at Coral Ridge: Jack Mowday, Glenn Berg, and Richard Rhine. Jack was a trainer, lieutenant, and teacher in EE. Glenn was also a teacher/trainer in EE. All three were excited about sharing their faith. They didnât consider it a drag. They thought it was exciting and fun.

One of the young men had always wanted to take a ride in a hot air balloon, so for his birthday his wife purchased that ride for him and his dear friends. They took off from near the church and glided down towards Davie. When they came to the Rolling Hills Golf Club the balloon ran into some electric lines and burst into flames.

There on thatÂ SaturdayÂ morning, December 15, 1979, at 7:50 am all three and the pilot fell from the sky. All were killed. Many called it a tragedy. 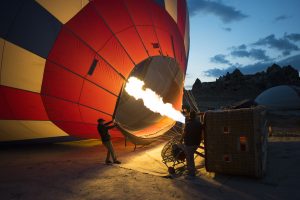 But thatâs not what Dr. Kennedy said the next morning in church. He said, âTragedy? No, the tragedy is the person who lives a long life and never uses it to serve God.â

Please donât get me wrong. He was not saying that we should not grieve. He was deeply wounded by the loss of these close friends and co-workers. But I guess he wanted our focus to be where Christ encouraged us to put our focus: Â on those who remain (Luke 13). For those of us who are Christians, we need to learn to use such times as an opportunity to share Christ with those around us. For those yet without Christ, they need to hear the truth, and repent.

Indeed, the Gospel is the best (and maybe the only) way to turn tragedy into triumph! Please look for your opportunity to share with someone today.

May God bless you as you do!

6 Responses to From Tragedy to Triumph!