Jos is a city of some 900,000 people in central Nigeria that sits on the divide between the nationâs Muslim north and Christian south. The name Jos is reportedly an acronym for âJesus our Savior,â but itâs been troubled by deadly violence for years. Within the last month, suicide car bomb attacks have struck both an evangelical and a Catholic church in Jos killing nine people and injuring many more. 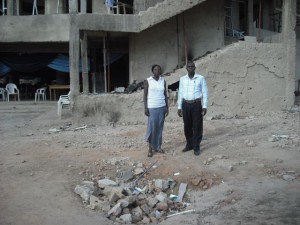 An EE field worker traveled to Jos recently to visit the Church of Christ in Nigeria which was attacked on February 26 and prepared an amazing report of Godâs mercy and power in the face of a cruel assault.

He said he was still 200 yards away from the blast site when he found âbroken windows, bent and mangled trim on the buildings.â When he and local EE staff members approached the still-under-construction worship center where the car bomb detonated, he was shocked at the power of the blast visible in the âbent and twisted metalâ of what had once been an automobile. The vehicle was just 20 feet from where 1,000 people had been worshipping God on the morning of the bombing. Iâll let him tell the story from here:

I was suddenly overwhelmed with a sense of Godâs presence. With the proximity of the blast to the building, the fact the building had no walls between the worshipers and the blast and flying debris, [it was] just open space where men, women, and youth were engaged in worship. The picture of the devastation in my mind was horrible. All around me I could see twisted metal, broken pieces of wood, and buildings that had been damaged. 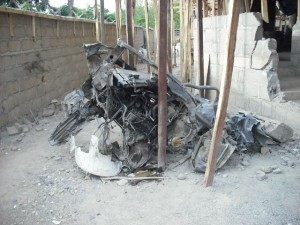 Ah, but that day God had another plan. One worker (names are left out because this is a sensitive area) told me that the worshippers inside did not even hear the blast. Some twenty feet away and they did not hear it. As I write this I am overwhelmed with awe at the power of the blast. Yet no one inside was killed. This local worker then began to relate to me what had been reported. One church member had looked over where the car had come in and said she only saw a blanket being suspended along the area of the blast. One of the children that was in the childrenâs ministry center, which overlooks the new church building, said they saw really big men surrounding the church building. I have been witness to some great works of God in my life, but this was simply beyond words! 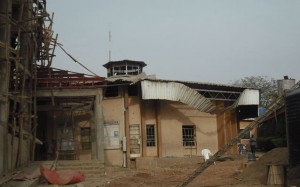 That Sunday morning a suicide bomber from Boco Haram had intended to kill as many people as possible. He had succeeded to kill an eight-year-old girl who was struck by the car as he sped onto the church property, an 8-month-old, and two others. 38 others were injured and treated.

What I saw that day will stick in my mind for a long time. My God, our God, is an awesome God.

The following Sunday you would think the worshippers would have stayed home. Not at the Church of Christ in Jos, Nigeria. You see, the next Sunday there were more worshippers, they flowed outside the building walls. That day they all gave thanks to our Great God!

On Sunday, March 11, 2012, a Catholic Church in Jos was bombed in the same fashion. Another 5 were killed in that blast.

Please continue to pray for Jos and all of Nigeria that there might be peace in that region.

Amen. Please pray for an end to the violence in Jos and for Godâs continued blessing on the work he is doing in Jos and across Nigeria through Evangelism Explosion. May His name be praised!