GOT JESUS? MaybeâMaybe Not posted by jwatson on Dec 17, 2013 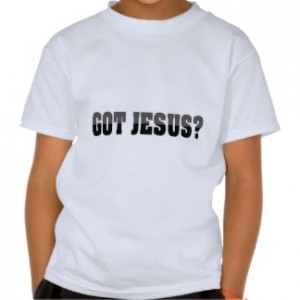 The t-shirt screamed âbeliever in Christ.â

The words âGOT JESUS?â adorned the front of the shirt in all capital letters. It was a perfect opening for the EE team to stop the young man and engage him in a spiritual conversation.

His name was Ryan and he was sure he was going to Heaven, but he had no idea how. After sharing the Gospel with him, Ryan made a profession of faith in Christ, and Jesus became much more than a name he wore on a t-shirt. Jesus became Ryanâs Lord and Savior.

Thanks to EE field rep Albert Kaidor and his team for sharing that wonderful story from northern Florida.