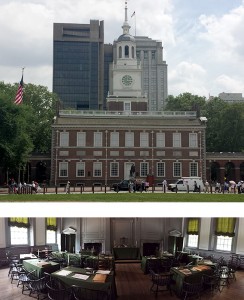 If you haven’t spent anytime in Philadelphia, you should. It is home to Independence Hall, arguably the most prominent meeting place in U.S. history. In independence Hall our founding fathers adopted our Declaration of Independence as well as drafted and ratified our Constitution. Â The very heart of the nation was born in these chambers. Â While on a tour of this piece of history, it struck me that I am the recipient and legacy of those founders. In fact, we all are.

As our founders poured out of Independence Hall in 1787, with Constitution in hand, Benjamin Franklin was asked, âWell, Doctor, what have we gotâa Republic or a Monarchy?â

Ben Franklin replied, âA Republic, if you can keep it.â

Those words, “if you can keep it” have been racing in my mind ever since. I believe that statement is meant for you and me. We are the keepers of this great liberty âfor the people and by the people.â But go deeper with me. When discussing the new nation our founders said:

â[T]he religion which has introduced civil liberty is the religion of Christ and His apostlesâ¦ This is genuine Christianity and to this we owe our free constitutions of government.129â Â -Noah Webster

âOf all the dispositions and habits which lead to political prosperity, Religion and Morality are indispensable supports.â Â -George Washington

I have hundreds more…

Our founders understood a pivotal truth in establishing the country. They understood that the very foundation of freedom is found in Jesus Christ. Our founders knew that true freedom of the heart came not from government but from a Savior. The very foundations for the government they established are an outflow of freedom in a personal Savior. As Americans we donât need to be reminded that we are the land of the free, what we need is to be reminded where that freedom came from. This nation wasnât a brand new concept for the founders; it was the outflow of the Gospel in governing our own lives before God

The Christian faith cannot be separated from the founding of the United States. And yet, millions continue to try to re-write history and paint our founders as simply moral men. The Bible has been removed from our classrooms, courtrooms, and culture. It baffles me that we seek to be a blessed nation without knowing the one who blesses. We seek to lead without the sovereign leader. Have we forgotten our national motto, âIn God we trustâ? I donât pretend to know all of the answers but let me suggest the first step in being a statesman. Share the gospel with someone you knowâanyone. Â A Statesman understands that there is no United States apart from the Creator.

I donât know how Franklin would view the U.S. today, but I can guess. The challenge has been issued. How will you keep it?