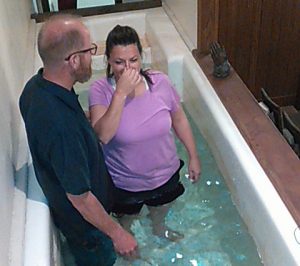 One year ago, Southern Temple Baptist Church was slowly dwindling. Located in the inner city of Oklahoma City, Oklahoma, the aging congregation struggled â believing there was not much left for them to do.

âThey had given up on doing any kind of evangelism,â said Pastor Lynn Allen Turner, who left a street evangelism ministry to pastor the small church. Most of the 12 individuals who attended services on Sundays and Wednesdays were wheelchair or stroller-bound.

When Turner met EE Prison Ministry director, Art Hallett, he decided to get his credentials to teach EE in the prisons. He began leading a Share Your Faith workshop with some of the 250 women at the Oklahoma Community Corrections Center (OKCCC) in downtown Oklahoma City.

âThey were excited and began asking questions about our church,â said Turner. He invited them to services on Sundays and Wednesdays and agreed to provide a meal afterward. âThe church was reluctant at first, but they fell in love with the women who visited. They went from an attitude of not being able to do anything to an attitude of what more can we do.â

Several women from the correctional facility invited their families to join them at the small church. As numbers grew, people from the community took interest and came as well. Many had prison records or had relatives in jail. Within a few weeks, participation at services doubled. And then it doubled again. Today, the church averages between 35 and 40 for each service.

âEvery week is a testimony,â said Turner. Members of his congregation began praying for men and women in prison and sending them notes of encouragement and prayer cards. To date, five women have been baptized, and two more have requested to be baptized. 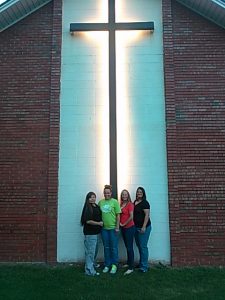 Amanda was baptized last spring. She received a Bible and became a believer while she was in prison. She asked to be baptized simply because she wanted to start her life off right.

âI have always known about God. But it wasnât until I was put in prison that I truly accepted Jesus Christ into my heart and started a relationship with Him,â Amanda said. âI found grace within these walls along with my growing faith, and now I would like to share, spread, and teach others what I am learning.â

âItâs a very dark yard,â said Turner. âTheir goal is to change that. We can give them the tools to do it.â

To date, dozens of men have graduated from the program at Sayer. They have led 15 men to faith in Jesus Christ. Eventually, Turner hopes to train one in every fifty men there to share the Gospel. He even plans to launch a Spanish-speaking workshop this fall. 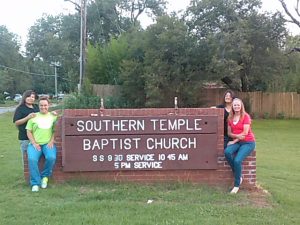 EEâs prison ministry has a solid track record of changing the percentage of individuals who return to prison after being released. Learning how to share their faith builds confidence and communication skills that they can apply to job interviews on the outside. According to The Bureau of Justice Statistics, 76.6 percent of released prisons return to jail within five years of release. However, the rate of return among individuals who have been trained through EE Prison Ministry is less than 10 percent!

Back at his church, Turner is seeing things change. The members of Southern Temple have now served more than 1,200 meals and befriended dozens of women in the prisons. They made 30 gift baskets for ladies at OKCCC, with hygiene and care items. Members of the congregation are currently learning Prison EE alongside the women from the correctional facilities who attend their church, so they can better relate to each other.

âThey might not be able to go knocking on doors, but they can ask questions when they are getting their hair done,â said Turner. âWhatever it takes to be a light for Christ in this community.â