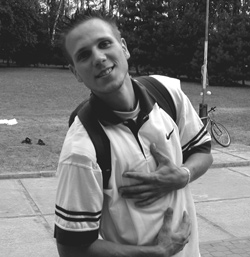 By God’s grace we are called to rescue people from death to life eternal. Been doing it for years. The story of Komil from Poland is a prime example. Komil, typical of a lot of teens, failed. He was desperately trying to make his life count for something, feverish with attempts for peer approval. It didnât work. And when his hope meter was empty, he prepared to take his life.

He was so bent on succeeding that he not only hung a rope around his neck to hang himself, but just in case the pain was too much torture (seems ironic, huh?), he attached three hand grenades to his belt to obliterate himself and probably the house, and the rooftop, from where he would leap.

The ring of life

Then God did the impossible. Next to the grenades, in his pocket, was his cell phone. It rang. And it was an angel in the form of Komilâs friend, trained in EE, who came to the rescue. After getting Komil off of that roof, Komil prayed with his friend and eventually came to understand that what he was trying to secure for himself, Christ did for him. Done deal. Today, Komil is reaching others with the Gospel through EE and is as joyful as ever with purpose.

As we near the end of another calendar year, the importance of our work to transform lives cannot be underestimated. Currently, we need to raise $280,000 by midnight December 31. Valuable rescue work could be delayed or it could end. Worse, people like Komil might not hear of the freedom of the Gospel of Jesus Christ.