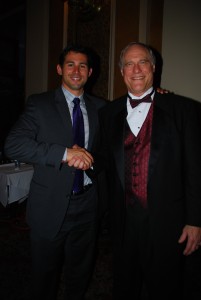 Calos Reyes with Dr. George Roller, director of the Center for Christian Statesmanship

This past month, I had the pleasure to experience the life of James Kennedy through the stories of his closest friends and wife. It was fascinating to hear about their journey and the pivotal moments of their lives that God used to help produce a ministry which has touched the globe. Jim and Anne Kennedy allowed God to use them to change the world. And he can use you tooâ¦

God is in the business of using His creation to accomplish amazing things if you allow Him.Â  Letâs start with the dream. If you have ever received a dream or vision from God you know what Iâm talking about. Sometimes these dreams are simple and practical. Other times these dreams are so outrageously big, that people think you’re crazy. I am a fan of those type of dreams. If you need examples ask Elijah, who stopped the rain for three years.Â Ask William Wilberforce who would work to abolish the slave trade.Â Ask Billy Graham who would fill stadiums and lead millions to Christ. Â These men had a dream big enough that only God could accomplish it and get the glory. And if I am being sincere, I want to be used by God to live out one of those dreams. It so happens I have one of those dreams and if you would allow Iâd like to share it with you.

I believe God has revealed a dream to me for The Center for Christian Statesmanship. I can see 25 Capital Hill Liaisons with the Center. Yes, I said 25! 25 other young men and women doing what I do. Sound big enough?!? Interns from all over the United States would hear the Gospel of Jesus Christ in Washington D.C. AND be equipped to share their faith as they return to their homes across these fifty states.

Could you even imagine?

I can see a confused congressman as he tries to evaluate why all of his staff are talking about Jesus before meetings. I envision Interns and staffers alike all carrying around Bibles and Christian literature. I can picture staffers referencing scripture as they write legislation and mark up bills. Could you imagine our U.S. Congress not concerned just with the will of their constituents but with the will of the God of the universe?

Could you even imagine?

My heart leaps with the joy at the idea of an intern who is trained in sharing the gospel. And boldly proclaims it to change the lives of the men and women who God has placed in seats of power. If you truly believe that our God is capable of anything, then what greater show of His glory than the renewal of a nation beginning in its capitol city? The implications of such a dream would impact the world. And I am certain beyond the shadow of a doubt that in this dream, only God could get the glory. I know it all sounds rather grandiose. But in all honesty, it might be too small.Â Will you join with me in this dream and commit to pray that God will bring it to fruition?