The Truth About (Many) Christians and Evangelism By Dr. James Emery White posted by John Sorensen on Sep 10, 2014 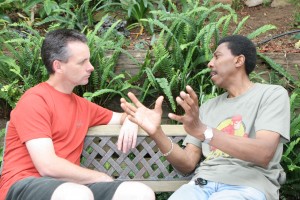 I have posted this article by Dr. James Emery White because I think it stimulates our thinking and discussion on the Church and its role in evangelism.Â  Dr. White is the founding and senior pastor of Mecklenburg Community Church in Charlotte, North Carolina; President of Serious Times, a ministry that explores the intersection ofÂ faith and culture and author of over a dozen books.Â Â

Letâs cut to the chase on something.

Almost everybody who follows Christ, and almost every gathering of those Christ-followers constituting a church, says the same thing:Â Â  âWe want to reach the world for Christ.â

Yet most donât. So whereâs the breakdown?

Itâs not strategy. There are vast numbers of churches who are successfully penetrating the culture of the ânones,â growing through conversion growth, and who willingly offer their tried and true strategies to any and all who wish to learn.

Itâs not theology. As mentioned, almost every Christian church would have evangelism as part of their core values and integral to their mission statement.

Itâs not the new generation of leadership. Most young leaders got into the game to see a lost world won to Christ. They are sold out and ready to rock.

Itâs not the new generation of Christians. If you want to meet an evangelistic animal, spend time with a new Believer. They are, in the best sense of the word, shameless with enthusiasm.

So what is the problem? Jesus knew!

When challenged about His own missional emphasis toward those on the outside of faith, He responded: âWho needs a doctor: the healthy or the sick? Go figure out what the Scripture means: ‘I’m after mercy, not religion.’ I’m here to invite outsiders, not coddle insiders'” (Matthew 9:12-13, Msg).

Countless numbers of leaders and members of churches have given in to a Christian consumerism. They embrace a mentality that gives ample rhetorical support to evangelistic intent but resists violently at the point of implementation because — at the point of actually âdoingâ it — it âcostsâ them.

You fill in the rest of the blanks. The problem with outreach today is that the most basic and elemental issues related to building a relationship with someone apart from Christ;

…and then engaging in spiritual conversations;

…and then inviting them to an open and winsome and compelling âfront doorâ so that they can come and see, come and hear, come and experience;

…is resisted by the very people who say they want those unchurched people to come and find Jesus.

Why? Because it would call for sacrifice or inconvenience of some kind. A leader would have to work harder, or invest in vision-casting and face potential opposition. Attenders would have to be part of a church that no longer exists solely to serve them, but to serve those who have yet to enter the doors.

Which means that evangelism is fine in theory, but not in practice, because in practice evangelism almost always involves death to self, the complete anti-consumer state of mind.

So can we change? Sure. But only when we look in the mirror and own the truth about our consumerism: Â we say we want them in heaven,

â¦but we act like they can go to hell.

One Response to The Truth About (Many) Christians and Evangelism By Dr. James Emery White