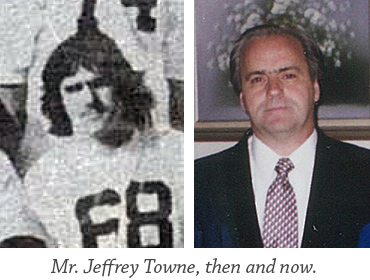 Unless someone prays with us on the spot, we never know the outcome of our witnessing. We know from the Bible that Godâs Word never returns voidâeven if we hand someone a Gospel tract.

Almost 40 years ago, a young Mr. Jeffrey Towne received a Gospel tract at a gas station in Fort Lauderdale, FL, and was rather unpleasant in his response to the witness. I can imagine that the witness felt like a failure as many of us would in a similar situation. But thatâs not the end of the story as Mr. Towne explains in this rivoting letter:

Almost 40 years has gone by since I first met you. It was February of 1975. I was an 18-year-old high school graduate from Andover, Massachusetts. My father had a boat docked at a marina in Ft. Lauderdale, and I was there visiting him. I had gotten a job at a gas station in Ft. Lauderdale. I do not quite remember what street the gas station was on, but it was on a main boulevard that ran east to west (like the Broward Blvd or Oakland Park). To the best of my memory, there was a large brick post office before the gas station (on the left heading west â away from the ocean). Also, I remember clearly that this gas station was right next door to another gas station (which was on the left as well just a stone’s throw heading further west).

I grew up in a beautiful little town in New England. We all lived in neighborhoods, and, as a child, my friends and I played together and stayed together. It was very peaceful and very securing. Up to that time, I was a lot like any other child, dreaming about playing in the big leagues. In fact, as a 12-year-old boy, I actually wrote to many NFL teams seeing if I could play for them. I didn’t quite realize back then why no one ever had written back to me.

As I entered into my high school years, I began to have a keen sense and awareness of God. We had a large family Bible at home, and I would read it when no one was around. It wasn’t that I was ashamed of it (the Bible) but it was somewhat foreign to me. I did grow up in a small Baptist church but I never experienced a one on one relationship that a person could have with this Book.

As I read the Bible, I never once doubted its authority. That is, I knew that it was true and that it was written by God Himself. Yet, in some ways, I felt, as I was reading it, that I was more of an outsider looking in and more of an observer of its truths rather than a participant. Yet through all my times of quiet while reading this Book, I did develop a great sense of awe and respect for the God who wrote it. As I came upon my reading in the book of Leviticus, I actually developed a great sense of love towards God for the first time in my life. I saw how He specifically wrote certain laws regarding those whose lives were less fortunate. For example, caring for the blind and lame. I actually remember thinking to myself how much love and care God had towards those in need. As I continued in my reading through the Law of Moses, I couldn’t help but notice how God promised blessing to those who feared His name and kept His commandments. It all seemed so good to me, and it made such perfect sense. As I continued reading on in this Book, I came across other truths which, quite frankly, scared me. It was when God declared His judgments and cursing upon those who sinned and rebelled against His Word. Even to curse one’s parents was punishable by death. I had never been so aware of how serious God was toward sin and disobedience. Yet what truly baffled my thoughts toward God was this one question which was constantly going through my mind. And that was: if I had committed such sins which were worthy of death, how then was I still alive? It was not that I wanted to die, but was very confused. One thing for sure, is that in my confusion, I never doubted that God was true. It was just that I had no answer to this question of “Why am I still living when God said I should die?”

This is when I met you for the first and only time. As I was working at this particular gas station, you pulled in for gas. You were headed east bound (toward the ocean) and entered in on the right side of the gas pumps. It was nighttime and the car you were driving (from what I remember) was a smaller size four door. After you paid for the gas in cash (remember, this was the 70’s), you asked me a question point blank. You said to me, “Are you going to heaven?” It only took about one second when I answered you with a shove and a direct push to get you back into your car and out of my life. I remember you stuttered for words, and I simply overpowered you with a louder voice. You did, however, manage to give me a small Bible tract called “This Was Your Life.” I don’t know why I reacted that way, especially since my heart was indeed searching for God’s answers. Perhaps it was the power of sin in my life and the blindness that it causes whereby one cannot even “see” (recognize) when God places before him those things which are for his own good. And, as I look back, I’m almost certain that as you got into your car that night, you may have felt (just like I would have felt too) like a failure. You got a horrible response, a violent reaction, an earful of sarcasm, and a shove off as a good-bye. And worst of all, you never really got to say anything as I mocked you while you tried to talk to me. I can almost hear you saying to yourself, “Maybe I shouldn’t have ever said anything to that punk.”

That night, around midnight, I arrived home at my father’s boat. I only had a bicycle, but the roads were mostly flat. As I got ready for bed, I emptied the pockets of my shorts and put the stuff on my bed (my keys, chapstick, and unbeknown to me âthat Bible tract). Well, as I stood there all alone, I read that tract. It was then, at that moment, while reading the Bible verses found in that tract, that the longing question which I had about God (why I was still alive though worthy of death) was answered. I “saw” for the very first time in my life that the reason I did not die was because someone else died in my place. And that One was Jesus Christ. In an instant my soul was reborn and, now, I immediately knew I was no longer an outsider looking in. Although I had no idea what happened or any knowledge of certain Biblical phrases such as “the new birth,” “justification” etc, I was certain that I now knew the Lord. My whole being inside me was changed at that moment. I remember looking in the mirror and seeing my face, the long hair, the Fu Manchu mustache and saying, “I see the same face, but I don’t see the same person.” Again, I had no idea what had just taken place in this new birth. Immediately, on the following morning, I had an unquenchable thirst to read the Bible. I could not even think about anything else. I biked to the nearest library and found a Bible and, within two days, I read the whole New Testament.

Without getting into too much detail about the 40 years that have followed, I just want to say that God has given to me a beautiful and godly wife and four children who fear the lord exceedingly. I have taught Bible study for over 20 years at a jail and have shared my Bible with literally thousands of people. Yet, like when I first met you and rejected you, I have encountered this same rejection from almost every person that I have been teaching the Scriptures to in the last 40 years. Some are polite, some listen, but ultimately all reject. I have only known of three people who have believed unto salvation and only one of them was directly related to my witness. Yet, I continue on because of your testimony. Just as you never dreamed that “that person at the gas station” would ever get saved, so also I do hope that just as I received Christ as my Savior, so also will they one day do the same. Maybe on this side of heaven, I will never know or see the fruits of my labors, but I do know one thing for sure… God’s Word never returns void yet accomplishes “His” purposes.

Finally, I do not know if you are still in Ft. Lauderdale or even if you are still living, but I took a chance to write to you. I know you will remember that night at the gas station. My only regret in life is that I wish I could apologize to all those whom I harmed (whether physically or emotionally) during the years of my being unsaved. I have never forgotten just how cruel sin can work itself through a person (me) who knows not the Lord.

Anyway, I hope you get to read this and remember the words of our Lord Jesus Christ written by the Apostle Paul in 1 Corinthians 15:58 â âTherefore, my beloved brethren, be steadfast, immovable, always abounding in the work of the Lord, knowing that your labor in the Lord is not in vain.â

We serve a risen savior.

We hope this encourages you in your witnessing especially when you think you have failed or didn’t get it right. Please share this email with those you know who were involved in EE in 1975 in Fort Lauderdale. Maybe this story will get to the person who Jeffrey is referring to from the past.

And be like this faithful witness. Email our Gospel tract to an unbelieving friend, relative, associate or neighbor. Then share your story with me. Simply email them this link, and ask for their opinion.

4 Responses to We Just Never Know