What to Say When the Plane Is About to Crash posted by John Sorensen on Sep 12, 2013 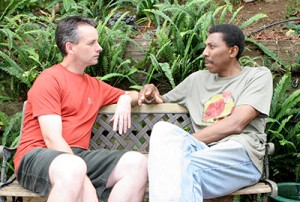 One woman was sobbing uncontrollably. Another was in hysterics. The cabin was thick with fear as the commercial airplane flew back to Fort Lauderdale for what might be a crash landing. The landing gear had malfunctioned and the pilot was about to touch down as best he could.

EE founder D. James Kennedy was among the passengers. His reaction? Well, trust me, his knuckles werenât white. As the plane made its approach, he was talking with another passenger he knew and said loudly, so as many as possible would hear him, âThe good news is, if the plane goes down, I go up to be with the Lord.â

Thatâs what I call a bold witness.

Itâs also a model for how Christians should react in times of uncertainty and fear. Like now.

America may not be headed for a crash landing but we have just witnessed a dizzying set of military, diplomatic, and political maneuvers over Syria that have left us all unsettled, to say the least. It doesnât help the national mood that Syrian dictator Bashar Assad says the U.S. should âexpect everythingâ in response if the U.S. strikes Syria.

And with Iranâs nuclear program getting dangerously close to Israelâs red line, the entire Middle East is very much a powder keg right now.

So how should Christians respond?

Well, first, settle it in your own heart and mind that your whole confidence is in God. He is âour refuge and strength, a very present help in trouble,â and âtherefore we will not fear…â (Psalm 46:1-2 NKJV).

Second, be alert for opportunities to share your hope with others. People need to know that they can have a peace and confidence that transcends all the uncertainties we face in the world today. And thatâs found only in Jesus Christ.

He came to ârelease those who through fear of death were all their lifetime subject to bondageâ (Hebrews 2:15). Death, the king of terrors, has been defanged by Christâs death and resurrection. He promised that âWhoever believes in me, though he die, yet shall he liveâ (John 11:25 ESV).

So, if Syria comes up when talking to others, use it to share the ultimate hope we have in Christ. Be ready to give your version of Dr. Kennedyâs confident pronouncement, âIf this plane goes down, I go up.â