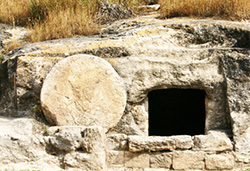 The death and resurrection of Jesus are events that took place 2,000 years ago. How can we know for sure that they happened just as the gospel writers claim? Well, there are many evidencesâfive of which Mike Ferraguti lays out in this blog post. The historical case for the resurrection is very strong and, frankly, compelling to anyone willing to honestly consider it. I recommend scholars Gary Habermas and Mike Licona to learn more.

But I think one of the most convincing and, really, irrefutable evidences for the truth of the Gospel, is what has happened since He came back from the deadâthe long trail of people, stretching from the first century to today, changed and made radiant and new by Jesus Christ.

It happened in my life after Tom Stebbins asked me two very intriguing questions and then shared the Gospel with me. It took place in the life of EE founder D. James Kennedy as well. He was dancing his life away as a very successful Arthur Murray dance instructor when he came to grips with his own sin and what Christ did for him in His death and resurrection. Itâs safe to say Jim Kennedy was radically transformed.

It happened even more dramatically in the life of Paul, who went in short order from a persecutor of Christianity to its most famous first century missionary and the author of much of the New Testament. There is no good explanation for the sudden and enduring change in his life other than that Jesus really did speak to him on the road to Damascus.

Maybe your own lifeâand the life of your familyâhas been powerfully redeemed by Jesus. Thatâs evidence which showcases the truth of what we will celebrate this coming Sunday. Millions of people have been profoundly changed from the first century on.

Paul testified to the transformation Christ brings in his letter to Christians in the city of Corinth, a hotbed of sensuality in the ancient world. First, he tells them that âNeither fornicators, nor idolaters, nor adulterers, nor homosexuals, nor sodomites, nor thieves, nor covetous, nor drunkards, nor revilers, nor extortioners will inherit the kingdom of God.â

Thatâs a long list, and it turns out Paul was describing the former conduct of his congregation at Corinth. He goes on to add this: âAnd such were some of you. But you were washed, but you were sanctified, but you were justified in the name of the Lord Jesus and by the Spirit of our Godâ (1 Corinthians 6:9-11).

Sinners saved by grace. Itâs been happening for 2,000 years and continues to this day as we bring Christ to people we meet on lifeâs road. The Gospel is the âpower of God unto salvation,â and it works because He is risen. He is risen, indeed!

4 Responses to Yes, the Tomb Was Empty